The latest annual update on geographic mobility in the USA was released on 15 November 2017 by the Census Bureau. It shows a continuation of the long-term decline in mover rates, giving the within-US one-year address-change rate as 10.6% for 2016-17, the lowest since the Current Population Survey (CPS) series began in 1947-48 and barely half the 1-in-5 rate regularly recorded into the 1960s (Figure 1). 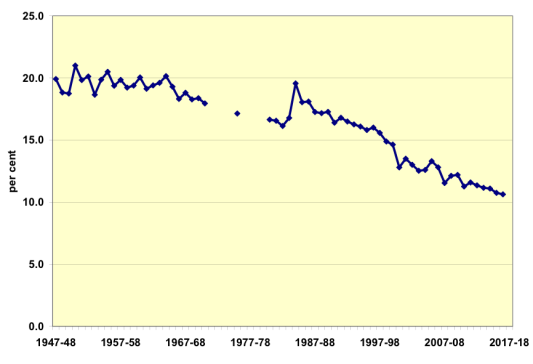 (Source: calculated from Current Population Survey data by Tony Champion. Note that the one-year move question was excluded from the CPS through most of the 1970s, and that revised data have been used for 1999-2005.)

This finding has been greeted by surprise in some quarters, given that it is now eight years since the Great Recession. Economic recovery may possibly be reflected in the fact that the inter-state rate rose in this latest year (up from 1.5% in 2015-16 to 1.7% in 2016-17), but similar upticks have been recorded twice previously since 2008 and yet not been sustained. More than offsetting this, however, is a fall in the rate of address changing within states, down from 9.2% to 8.9% between the two latest years.

Perhaps the most remarkable feature of the long-term record is how little fluctuations associated with the business cycle have altered the picture of long-term decline. While dips in rate are discernible in the recession times around 1991, 2001 and 2008, the rate didn’t recover fully the next year and now it is well below the latest dip of 2010-11.

Equally impressive is that the seemingly inexorable decline since the 1980s has been registered by all the three types of migration routinely published by the Census Bureau, as is clearly shown by the five-year averages shown in Figure 2. Even so, the relative reductions vary somewhat, the largest being for inter-state movement, down from 2.90% in 1981-86 to 1.57% in 2011-16, a 46% fall. At the other end of the geographical scale, the within-county rate fell by 33% over this period, while the intermediate-distance (‘between county within state’) rate was 36% lower by 2011-16.

In the words of the Brookings Institution’s William H. Frey, ‘The new data show a nation that continues to be heavily stuck in place.’ 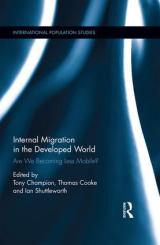 Detailed analysis of the US experience of internal migration, as well as that of six other countries, can be found in Internal Migration in the Developed World: Are We Becoming Less Mobile? edited by Tony Champion, Thomas Cooke and Ian Shuttleworth. This book is being launched at a meeting co-hosted by the Population Geography Research Group and the British Society for Population Studies in London on Thursday 11th January 2018. For more information about the event and for details of how to register, see this flyer.

This site uses Akismet to reduce spam. Learn how your comment data is processed.